the essential
A writer specializing in cinema, Guillaume Evin is publishing on October 7 a book that looks back on the forty-year career of the “Magnifique”, who died yesterday at the age of 88.

You published a “Belmondo Encyclopedia” in 2013 (ed. Hugo & Cie). What did you want to reveal through this new book?

This book is not a biography, but attempts to identify the Belmondo phenomenon through its seventy-four feature films, shot between 1967 and 2008, that is to say of “On foot, on horseback and in car “, where he had a small role, until” A man and his dog “. I tell the background of each film, book shooting anecdotes and of course take an interest in the roles he played and how Belmondo became the facetious, seductive and stuntman who is Bébel.

What do we learn there that we don’t already know?

We discover that Belmondo has shot in films that we have forgotten, such as “La sirène de Mississipi” by Truffaut, where he is against the job, a weak man in the face of a hard woman who plays with him, played by Catherine Deneuve. Before being “bankable”, he was a demanding actor and sharp in his choices, playing for Louis Malle, but also Melville or Godard.

Has he never been tempted by a career in Hollywood?

He did not want it: he would rather be king in his country than a servant abroad. Belmondo at the start of his career did everything to ensure that he was not forgotten, he was afraid of disappearing. He was shooting four or five films a year to occupy the screen. It was only in his thirties, around 1963-1964, that he found his marks and understood that the public had adopted him, that he was popular. He was unique in his niche.

What was its relation to notoriety?

He was not chasing prizes, moreover he only had one, a César for “Itinerary of a spoiled child” by Lelouch. What interested him was the contact with the public. His best reward was the success of his films at the box office.

What made him different from the other sacred monster of his generation, Alain Delon?

It is true that they hatched together, within a year, Delon in “Plein Soleil” and Belmondo in “A bout de souffle”. Together, they made up the two sides of the ideal actor. Delon embodying the dark side, the dark, and Belmondo the charisma and the patter. Delon was less comfortable in comedy, it was a dark star that established a distance. Whereas Belmondo, on the contrary, inspired closeness with people. They fed off this rivalry which was only cinematographic, because the two men appreciated each other. There was an emulation between these two actors. Until the day when Depardieu arrived, who captured all the major roles at the end of the 70s when Delon and Belmondo were approaching their fifties.

Dying and seven years younger: Hande Erçel surprises her fans with images of her first job 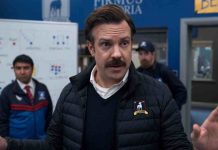 ‘Ted Lasso’, the Apple TV + series that breaks records at the 2021 Emmy Awards