‘Friends: The Reunion’ was viewed by more than 1 million people across India

The web series ‘Friends: The Reunion’ is streaming on Zee5 in India. Cinema lovers were eagerly waiting for this series. More than 10 lakh people have seen this series on the first day.

On the release of the most awaited web series ‘Friends: The Reunion’ on Thursday, it has been seen by more than 1 million people from across the country. Fans from all over the world have reacted emotionally on social media seeing the return of six Titanic friends and the discussion about the show is continuously increasing.

Amit Goenka, president of Zee’s digital businesses and platforms, said, “We are delighted to see the overwhelming response to ‘Friends: The Reunion’ on Channel G5 with over a million views and counting from across the country. It serves the audience We feel extremely proud to stream seamlessly across millions of screens. ”

Its director is Ben Winston. Other cast members include Maggie Wheeler (Janice), Tom Selleck (Richard), and James Michael Tyler (Gunther). Apart from this, many celebrities like Justin Bieber, Lady Gaga, Cindy Crawford, and Cara Delevingne are doing cameos in it. 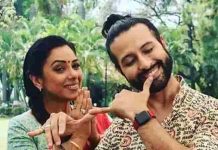