Ramayana: Will the team of Avatar make Hrithik Roshan ‘Ravan’? Earthquake will hit the silver screen

In Ramayana, Hrithik Roshan’s Ravan look to be set by Hollywood film Avatar’s Costume team: Bollywood star Hrithik Roshan (Hrithik Roshan) the previous release after the bumper success of the film War their fans keen to see on screen again their favorite stars Huh. The wave of Corona has also affected the projects of the film star.

Due to which the official announcement of Hrithik Roshan’s next film has not been made yet. But in the meantime, the market of news is fast that film star Hrithik Roshan is going to be seen in the role of Ravana in producer Madhu Mantena’s upcoming film Ramayana.

There is a lot of buzz in the film circles about the film. The latest reports are that the makers are going to take the help of technicians of Hollywood film Avatar to make this film special. It is heard that the costume designer of the film Avatar has taken the initiative to show the film star Hrithik Roshan in the getup of Raavan.

Information about this has been received quoting a recent report by IMW Buzz. Obviously, the makers are going to spend money like water for this look of Hrithik Roshan. In this film, Hrithik Roshan will be seen in the role of Ravana, while actress Deepika Padukone will be seen in the role of Sita. In such a situation, there is a lot of excitement among the audience to see these two stars in these interesting characters on screen.

Talking about Hrithik Roshan’s workfront, apart from the actor Ramayana, War 2 is also in the news. Whether Tiger Shroff will be seen with him in this film or not is still in doubt. Whereas apart from this, he is also busy with Fighter, Krrish 4.

Apart from Ramayana, the pair of Hrithik Roshan and Deepika Padukone is also going to be seen together in the film Fighter. So are you excited about these amazing line ups of Hrithik Roshan. 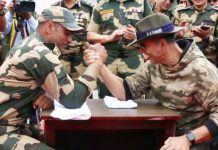