The story of the well-known serial ‘Sasural Simar Ka 2’ has come to an interesting point these days. The lives of Aarav, Vivaan, Simar and Reema have become badly entangled due to Mataji’s insistence.

Till now you have seen in the serial ‘Sasural Simar 2’, during the Haldi and Mehndi ceremony, Mataji creates a ruckus. Mataji announces that Aarav (Avinash Mukherjee) and Reema (Tanya Sharma) cannot get married. After which Mataji puts a condition in front of the Narayan family.

Mataji says that she wants Vivaan (Karan Sharma) and Simar (Radhika Muthukumar) to get married instead of Aarav and Reema. Big Simar (Dipika Kakar) is shocked to know about this, while on the other hand Reema is also quite surprised. The Narayan family bows before the insistence of the mother. After which Mataji announces the marriage of Vivaan and Simar.

Mataji says that both her grandsons will get married in the same mandap. Hearing this, Vivaan’s heart breaks. Vivaan is unable to tell Mataji that he loves Reema. Due to this decision of Mataji, there is going to be a lot of uproar in the upcoming episode of serial ‘Sasural Simar Ka 2’.

In the upcoming episode of the serial ‘Sasural Simar Ka 2’, you will see that the truth of Vivaan and Reema will be revealed in front of Aarav on the wedding day. Aarav will learn that Vivaan wants to marry Reema. Knowing this, Aarav will decide not to marry Reema. Aarav will promise Vivaan that he will not let his brother’s heart break. After which Vivaan will get Aarav and Reema married.

At the same time, Aarav himself will marry Simar so that no one knows anything about it. In such a situation, it will be interesting to see how Mataji will do to Aarav after knowing about this change in marriage.

Vicky Kaushal hits the gym on a rainy day! 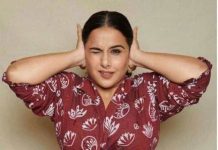 You can call me short, fat but lioness will find its way- Vidya Balan on body shaming

Vicky Kaushal hits the gym on a rainy day!

You can call me short, fat but lioness will find its...

Vikas Gupta had dated Pratyusha Banerjee even after being bisexual, made...

TV’s serpent Anita Hassanandani hit a U-turn as soon as the...